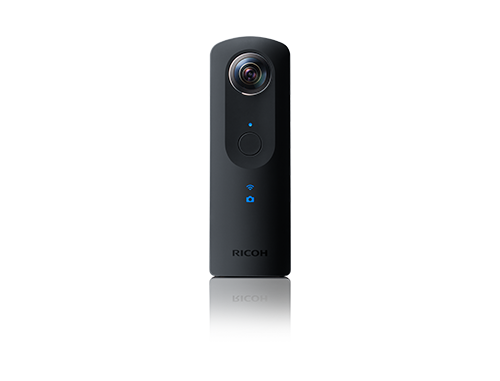 I ordered and received a used (boxed in good condition) Ricoh Theta S from Amazon.co.uk the last week in June. I took a quick photo and video in my sitting room to test it out. The device itself is quite small and feels good in the hand. It’s roughly the size of a phone and could easily fit in your pocket. However, the device I received had trouble charging and I had to return it. The device impressed me in the little time I spent with it so I decided to pick up another one.

The device seems quite sturdy and gives me the impression that it’s well built. It has a sort of matte finish which might possibly pick up fingerprints. There are two super fisheye lenses on each side of the Ricoh Theta S. Each fisheye lens can capture images and video of around 190 degrees. As the lenses protrude from the device, it is possible to scratch the lenses. Ricoh provide a neoprene case for the device and I would recommend using it. There is a shutter button on the front and on the side is the power button, wifi button and video/photo switch. The wifi lets you connect to the device with your smart phone and adjust settings and liveview for photos. On the bottom of the device is a generic thread to fit a tripod screw. Something to note is that the Ricoh Theta S does not have expandable storage and can hold only 8GB.

The photo quality seemed very good for what the device is. It has a 14 megapixel sensor and the images output at approximately 5376 x 2688, which will appear lower when viewed on a screen. I’ve found that sometimes if you’re taking a picture indoors the image can be a little noisy. If you take an image while holding the device it can look a little strange as while the image is being stitched, the Ricoh Theta S itself is cut out. Usually when I shoot I use a monopod with legs. This lets you step away from the device and use a smartphone app to remotely take the image.

There is a timelapse feature which I have not utilised as of yet.

The video quality is a bit worse and softer than the photo quality. The video gets output at 1920 x 1080, but as it is spherical video, it will be lower when viewed on a screen.

While shooting video I noticed that there was slight different exposures on each lens so the stitch wasn’t the best. It still looked okay and would suffice for web work such as Facebook or Youtube. Below is a quick example.

Video of the ‘Sunbeam’ at Rossbeigh Beach, Kerry.

The Android app while functional could definitely be improved. I find accessing some of the different menus confusing at times. If you don’t use the Ricoh Theta S with the Wifi connected, it can be confusing when connecting to Wifi and attempting to transfer your images and videos using the app at first. However, after time you get quite familiar with the layout of the app.

If you have been using the Ricoh Theta S without your smartphone and app, you can then connect to your phone via WiFi and transfer your images and videos to your phone.

Theta+ is another app that is provided by Ricoh that lets you edit photos taken with your Ricoh Theta S. You can edit your 360 photos on the fly and add text or clip art style images. The other option is cropping the image and using different views. These include ‘Mirror Ball’, ‘Little Planet’, ‘Equirectangular’ and ‘Rectilinear’. ‘Little Planet’ probably my favourite way to edit and I find it gives great results with photos that you thought may have not been the best.

From the little time I spent with the initial Ricoh Theta S I received it left quite an impression. I took a photo and a video before the battery stopped working properly. That one photo and video I managed to take helped me make up my mind to purchase another after the first one had been returned. Since the new one arrived I have brought it with me everywhere. I am quite impressed with what you get from the device for the price. I would like for the design of the Android app to be a bit better, but its usable.

The second section of the conclusion has been written after a replacement Ricoh Theta S had been received. The battery life seems to be quite good. I have used it quite often in the week since receiving the device and according the app, the battery is still mostly full. Initially I had noticed noise in some images. It’s not a horrible amount and can be removed with some post processing. I have found that when shooting you can use ‘DR Compensation’ or ‘HDR Shooting’ modes to reduce this.